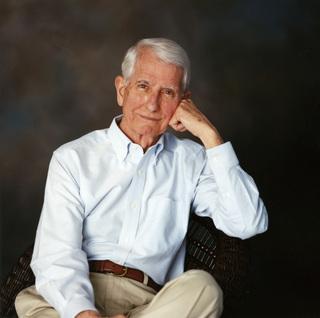 William H. Hallahan (b. 1925 d. 2018) was an Edgar-award winning American author whose works spanned genres, but who was best known for his best-selling mystery and occult novels.

Hallahan began writing suspense fiction in an empty office filled with ghosts.  The place was Detroit and Hallahan was the advertising creative director on the $30 million Plymouth car account for N. W. Ayer and Son Advertising agency.  When Ayer lost the account to another agency, Hallahan found himself "in a deafening silence" amidst an eeire parade of of empty desks and darkened offices thronged with ghosts of Campaigns Past.  He put a piece of yellow copy paper in the typewriter and began his career as a suspense storyteller.

Hallahan went on to publish numerous works, and his first novel, The Dead of Winter, was nominated by the Mystery Writers of America for the Edgar Allan Poe Award for Best First Mystery, and his fourth novel, Catch Me: Kill Me, was nominated and won the Edgar Allen Poe Award for Best Novel in 1978.  His third novel, The Search for Joseph Tully, was a New York Times Bestseller and hailed as one of the most frightening books of all time.

His series character Charlie Brewer, the fallen but philosophical CIA spy, first appeared in the Edgar award-winning Catch Me: Kill Me, and continued as the protagonist in The Trade, Foxcatcher and Tripletrap.

Hallahan was born in the shadow of Ebbets Field, Brooklyn, spent three years in the Navy, graduated with honors and a master degree from Temple University and worked variously as a college English professor, a copywriter, and an ad agency proprietor in his own agency, Hallahan Incorporated.

All of Hallahan's works received critical acclaim, including:

"A relentless, terrifying thriller." Dean Koontz on The Search for Joseph Tully

"Takes off like a Chinook and whisks you through a labyrinth non-stop until the final sentence." Clive Cussler on Catch Me: Kill Me

"Mr Hallahan will keep you up all night!"  New York Times on The Monk

The Dead of Winter

Three ordinary guys seek to redress a friend's murder—the fourth in their poker night quartet. Soon one thing leads to another culminating in an unforgettable tale of vengeance and its consequences.

"A book you will gulp down," Newgate Callendar, NY Times.

The forgery of a forgery leads the reader into the world of book collecting, publishing, historic type faces and rare samples of paper, where in the end every thing seems counterfeit, even the players.

"Ingenious…A twisting shocker of an conclusion…You wouldn't believe so much suspense and tension could be generated." The Washington Post.

The Search for Joseph Tully

The Keeper of the Children

To recover his teenage runaway daughter a father engages in an out-of-body battle with a fanatical mind-control monk .
“A mixture of horror and occultism told with driving force…a story that takes you will it all the way…to places far from normality…add this book to…other occult hits of the last decade.” New York Times.

Brother Timothy and a hawk from hell hasten to find Brendan Davitt, an otherwise ordinary man with an extraordinary purple aura, who can forgive Timothy for the greatest of all sins and bring ultimate destruction to the Inferno—unless the hawk finds him first.

"Mr. Hallahan will keep you up all night." New York Times.

Catch Me Kill Me

Charlie Brewer, a defrocked CIA castoff, and Ben Leary, patient and dedicated agent from Immigration and Naturalization, unaware of each other, race to find kidnapped Russian poet who is a pawn for the bigger stakes of a defecting Russian spy.

"Takes off like a Chinook and whisks you through a labyrinth non-stop until the final sentence." Clive Cussler.

“Hallahan at his brisk best…the action is lean and satisfying with a formidably tenacious hero, a charismatic post-glasnost villain, some clever spy puzzles and just the right dash of Le Carré-inspired cynicism.” Kirkus Review

Charlie Brewer, an intelligence agent, doesn't know why he was framed for an illegal arms deal, or why he is suddenly released, or why someone is trying to kill him until he finds himself in the middle of a deadly duel between agents of the US and Iran for key pieces of military hardware with him as the bait in the trap

A dramatic account of all the rifles provided by US Amy ordnance —and the dismal consequences—from the first musket to the M-16 automatic rifle.
“William Hallahan has captured its drama beautifully …and…prosecutes the U. S. Army Ordinance Corps without mercy, leaving the reader aching to lynch the scoundrels.” John Lehman, former Secretary of the Navy, Wall Street Journal.

“William H. Hallahan has crafted a fascinating story worthy of the attention of everyone wanting to learn more about the stirring early days of the American Revolution….Very readable…Highly recommended .” James Kirby Martin, Benedict Arnold: Revolutionary Hero.

The Day The American Revolution Ended

"...tells the story of the Americans' recovery and triumph with admirable clarity, fashioning his facts into an enjoyable narrative…a fine job…engaging style…excellent choice for fans of popular history." Publishers Weekly